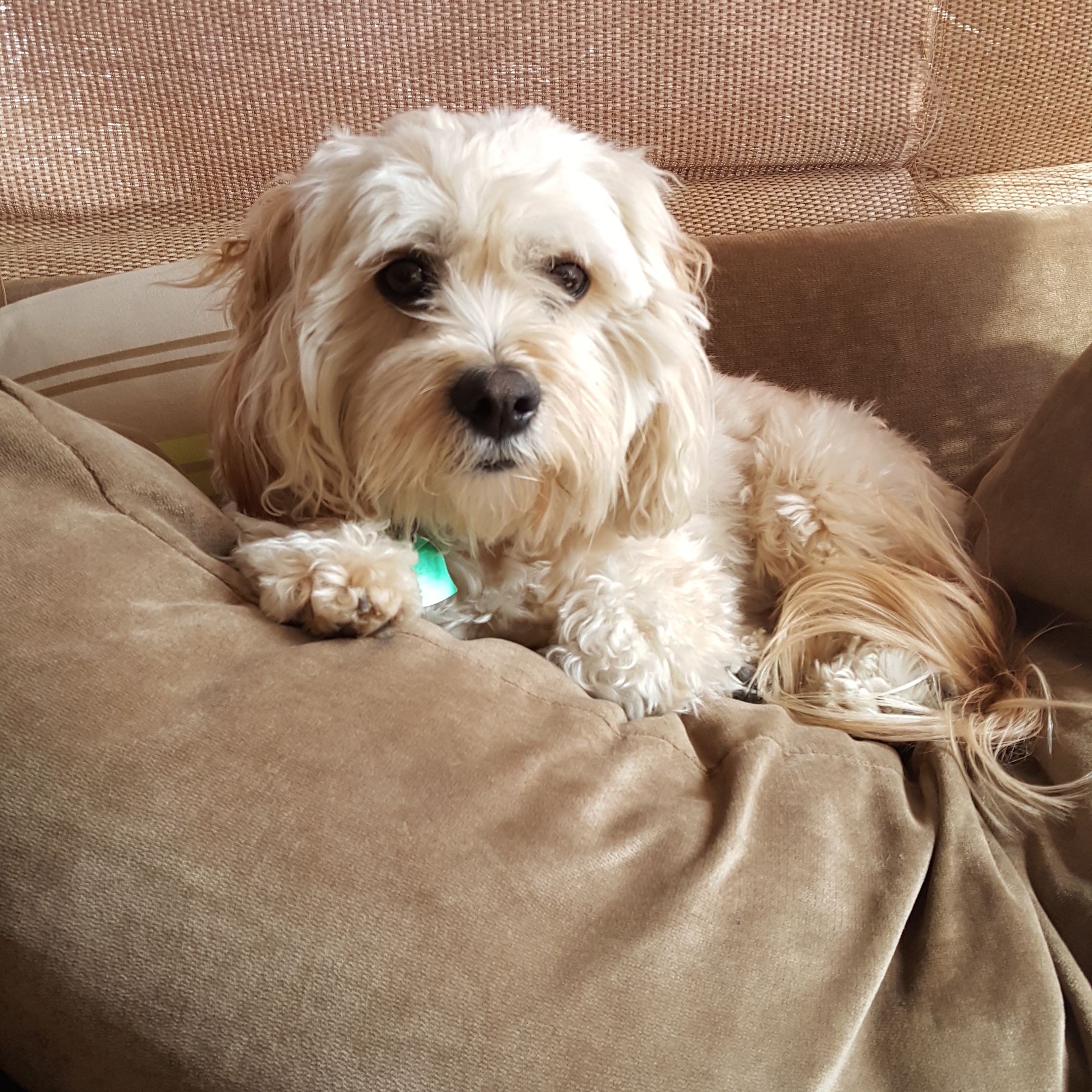 “How is your dog a rebel by accident?” Waggleview with Patricia Dunn, author of Rebels By Accident

The Dog Owner: PATRICIA DUNN (is author of Rebels By Accident (Dec. 2, 2014, Sourcebooks Fire.) Her writing has appeared in Salon.com, CSM, The Village Voice, The Nation, L.A. Weekly, and others. With an MFA in creative writing from Sarah Lawrence College, where she also teaches and works as the Director of the Writing Institute, this Bronx-raised rebel and former resident of Cairo settled in Connecticut, with her husband, teenage son, and toddler dog. Q: Why did you choose this dog?

My son used to call Butterscotch the “cancer dog.” I guess we all did.

I love dogs, but I was a single mom, who worked full-time, and I was a writer trying to finish a book; the idea of getting a puppy was, well, ludicrous. It would have been like saying to myself, “My hands are full, so why don’t I try and carry one more grocery bag at once into the house.” Of course, I often did this, which too often led to broken eggs and cans rolling around the driveway after I’d dropped one of the bags.

Then, at age 11, my son was diagnosed with Osteosarcoma. A puppy for Christmas made perfect sense.

I have to say that helping my son through his nine-month treatment, trips to the hospital, chemotherapy, surgery…having to go for 2 AM puppy walks, and finding affordable doggie day care, or someone to puppy sit for the longer hospital stays, may sound crazy, but it was that puppy that helped my son and myself get through that rough (yes, I was tempted to spell it ruff) time.

Butterscotch gave us both something other than the cancer to focus on, and he brought so much love and joy into our life, even when he ate half of my leather couch. He was only nine pounds at the time. Q: Do you talk to your dog? If so, what do you talk about?

All the time! He’s a good listener when he wants to be. He’ll lie next to me on the bed while I’m working on a project, and he’s great at plot. Also, character. He knows human behavior often better than I do. I’ll read him a paragraph I just wrote and he’s very good at saying, “That character would never do that.” Or, “You got it. She’s believable. Now get me a treat.”

Q: If he could talk to you, what would he say?

He would probably complain about his older brother. “Ali never wants to play with me. He’d rather play with his friends on the computer. And how come he gets a new cell phone and I’m not allowed to eat tissues. I love tissues.”

Q: You’re the author of the book Rebels By Accident. How is your dog a rebel by accident?

Butterscotch is a Rebel but not by accident. He rebels with purpose when he eats tissues or holes in underwear or socks. Q: If your dog had a job or career, what would he be doing?

Life Coach. He’s very good at helping people make good choices. If he hears me yelling at Ali, he’ll bark at Ali, telling him, “Come on Bro, you know better than that.” But if I’m yelling too much, he will turn to me and bark, “Yes, you had a long day, but we all have, so take a deep breath and have a treat. You’ll feel better.”

Q: What lesson in life has your dog taught you?

We all communicate in our own way. Understanding isn’t always about words, but about listening, paying attention to body language and to what is being communicated under the surface, with the heart. Q: How does your dog inspire you?

He makes me happy. He always knows when I need to play. He comes up to me, lies on his back, and covers his eyes with both paws. That’s when I ask, “Where’s Butterscotch?” He removes his paws and I say, “There he is!” I rub his tummy and we laugh and then we do it all over again.

Q: Where is your dog’s favorite place to go with you?

The big comfy chair in our living room. It’s not just me, my husband and my son too. He loves snuggling up to us when we are sitting in that chair. If I’m on the computer and he wants to get onto the chair, but the computer is in his way, he closes the computer screen with his paw so I will get the message. Q: Who or what does your dog find the most interesting?

We have a cat. When my son and I moved in with my then-fiancé, and now husband, Butters would hear Penny and go running around the house trying to find her. Penny loves the basement and only comes up at night, she did this before Butters moved in, but now, just to tease him, she’ll come up the stairs and meow and she’ll wait until he gets close, and then she runs down the basement stairs, which for some reason Butters will not go down. He goes up and down the other stairs in the house but not those stairs.

He also loves watching animals on television. If he sees a dog, he’ll bark until the dog is off screen, but he’ll watch another animal with great interest. He watched an hour of the most recent Planet of the Apes movie with me. He stared at the television and moving his head back and forth, and following the Apes with his eyes. He would have kept watching but I got bored and shut the television. Yes, his attention span is often longer than mine. Q: What is the most annoying thing other dog owners do?

I understand that every dog has it’s own personality and an owner is aware of this and needs to protect their pet, but often there will be a friendly dog who wants to play, and Butters wants to play too, and the owner will pick up their dog and walk away or say something like, “I don’t let my dog play with other dogs.” It was like the Mommy and Me classes that I attended with my son. There, a child could come up to your child and slap or bite him, and the parent would then make an excuse, but if your child just tried to sniff their kid, it was the end of the world.

Q: What does being a responsible dog owner mean to you?

It’s similar to being a responsible parent. You love your dog and you give your dog attention and care, but you don’t let him act like a spoiled brat. When he is harassing or barking at a visitor, you tell him it’s not okay. You remove him from the room. You don’t feed dogs from the table because they give you those big eyes. A little bit of spoiling is good for everyone, but too much is just, well too much. As you can see in the picture I have occasionally put a sweater on him when it’s cold, but also because it’s cute. But the only other times we dress him is during our favorite holiday—Halloween.

He’s been a bat, a chicken, a court jester, a cat, but my favorite was when my son was dressed up as Lady Gaga, and Butterscotch dressed up as Doggy Baba.

Q: Since you teach and work as the Director of the Writing Institute at Sarah Lawrence College, what type of writing class do you think your dog would take in order to bring his inner writer to life?

I think a class where he would get to do a lot of free writing from prompts. The more he is able to write without over thinking and let his unconscious flow the more the true writer inside of him will pour on to the page. Q: How has your dog changed your life?

I can’t remember life without him.

Q: Does your dog have a philosophy of life?

Que, sera, sera, what will be, will be. And don’t you even try to leave my house! If I like you, you’re staying!

Q: I love my dog because he’s the second child I always wanted.

Q: Have you ever made dog treats for your dog? If so, please share your recipe.

No. But we do buy him doggie birthday cakes. WAGGLEVIEW™: These interviews are focused on leaders in business, the community, or at home. My hope in doing this is to present remarkable and respected people in their community with their beloved pets. Who can resist reading about pets and what these people do? This is a platform for people to display their talents; their own business, a new book, a deeply loved passion for a charity or their own job. It also shows their love for their pet!

Thank you Patricia for taking the time to participate in the Waggleview™.

Is your dog a rebel by accident or on purpose? Please share your stories.

Look for some other waggleviews with authors Alexis Paige and Sarah Albee.